The Guilt We Carry (Hardcover) 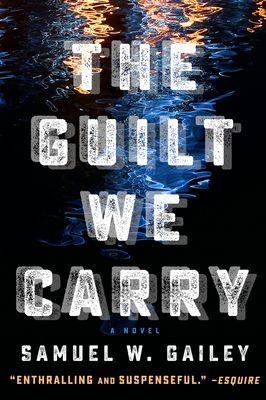 A frantic race against the clock, against death, against inner demons

Since the tragic accident that brutally ended her childhood, Alice O’Farrell has been haunted by her past. Unable to bear the guilt of negligence that led to the death of her younger brother, fifteen-year-old Alice runs away from home. She lives on the streets, makes one bad decision after another, and drowns her guilt in alcohol.

But, everything changes when she stumbles upon a startling scene: a dead drug dealer and a duffel bag full of ninety-one thousand dollars in cash. Recognizing this as an opportunity for a fresh start, Alice takes the money and runs. However, she soon finds herself fleeing from more than her own past—the dead dealer’s drug supplier wants his money back and will destroy her to get it.

A merciless manhunt ensues, headed by Sinclair—a formidable opponent—relentless, shrewd, and brutal. As blood is spilled all around her, Alice is eventually faced with her day of reckoning.

In the end, The Guilt We Carry is a story about redemption and forgiveness—but at what cost?

Samuel W. Gailey was raised in a small town in northeast Pennsylvania (population 379) and now resides on a remote island in the Pacific Northwest. The Guilt We Carry is his second novel, following the critically acclaimed Deep Winter. Gailey’s novels are intriguing studies of human nature and portray how the simplest act of fate can alter and shatter lives. Before writing novels, he worked in film production and eventually became a screenwriter, writing and developing shows for Showtime and Fox. He lives with his wife, author Ayn Gailey, and daughter on Orcas Island where he is a founding member of the Orcas Island Literary Festival, the Telluride of book festivals.

“This book is an RCR and a BBE—a Roller Coaster Ride and a Best Book Ever. Relish in the reading of it, take your time even through the breathless parts, and enjoy every word. It's the Breaking Bad of the book world. A delish read with surprises to the very last page.” —New York Journal of Books

“Samuel Gailey's The Guilt We Carry is heartbreaking, hopeful, and touching. Gritty, dark, yet tender. Gailey lyrically weaves a story of loss and guilt into one of redemption. Never has misery been so elegantly written.” —Matt Coyle, Anthony Award-winning author

“An extraordinary thriller, The Guilt We Carry is driven by a plot that is both economic and subtly complicated. Samuel W. Gailey propels his characters into one another with a tough empathy. The result is a tense, scintillating read that is also human and ultimately satisfying as the book hurtles toward its unexpected but well-earned conclusion.” —Bruce Holbert, author of Whiskey

"The Guilt We Carry, Alice O’Farrell, kept me up until five a.m. She is tragic, flawed, beaten down, but tough enough and resilient enough to survive. Gailey has delivered one of my favorite characters in recent memory. A nonstop burner of a novel.” —Willy Vlautin award-winning author of Don’t Skip Out on Me

“Fans of country noir will be right at home as Gailey builds the grit-soaked suspense.” —Booklist

“[A] gripping tale of redemption . . . Gailey does a superior job of making his flawed lead sympathetic.” —Publishers Weekly