The Curve of Time (Hardcover) 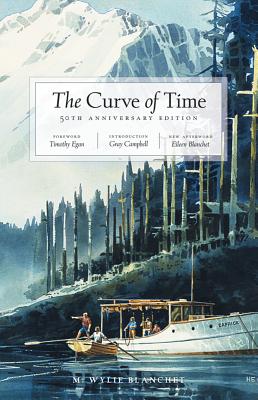 "Our world then was both wide and narrow -- wide in the immensity of sea and mountain; narrow in that the boat was very small, and we lived and camped, explored and swam in a little realm of our own making."
-- M. Wylie Blanchet

The 50th anniversary edition of this coastal British Columbia classic, now in beautifully illustrated hardcover, will make a timeless keepsake. This is a biography and astonishing adventure story of a woman who, left a widow in 1927, packed her five children onto a 25-foot boat and cruised the coastal waters of British Columbia, summer after summer. Muriel Wylie Blanchet acted single-handedly as skipper, navigator, engineer and, of course, mother, as she saw her crew through encounters with tides, fog, storms, rapids, cougars and bears. She sharpened in her children a special interest in Haida culture and in nature itself.

In this book, she left us with a sensitive and compelling account of their journeys.

M. Wylie Blanchet was born Muriel Wylie Liffiton on May 2, 1891, in Montreal, Quebec. She married Geoffrey Orme Blanchet in 1909, but was widowed in 1926, leaving her to raise five children on Vancouver Island in British Columbia. For several summers Muriel, her children, and the family dog set off in a twenty-five foot motorboat, the Caprice, to explore the waters between Vancouver Island and the rugged Canadian mainland. They were on their own, with Muriel as captain, anchoring in secluded coves to tramp the wilderness, examining architecture and burial grounds in deserted native villages, and meeting the region's various human and animal inhabitants. Muriel wrote about their journeys, and was successful in having articles published in magazines such as Blackwood's and Atlantic Monthly. In 1962, the year Muriel died, Blackwood and Sons of Edinburgh, Scotland published The Curve in Time, which described several summers of the family explorations. In 1968, Gray Publishing in Canada printed a second edition of The Curve in Time, and since then it has earned a reputation as a Canadian classic.