Separate: The Story of Plessy v. Ferguson, and America's Journey from Slavery to Segregation (Hardcover) 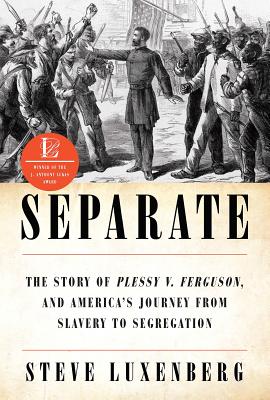 A myth-shattering narrative of how a nation embraced "separation" and its pernicious consequences.

Plessy v. Ferguson, the Supreme Court case synonymous with “separate but equal,” created remarkably little stir when the justices announced their near-unanimous decision on May 18, 1896. Yet it is one of the most compelling and dramatic stories of the nineteenth century, whose outcome embraced and protected segregation, and whose reverberations are still felt into the twenty-first.

Separate spans a striking range of characters and landscapes, bound together by the defining issue of their time and ours—race and equality. Wending its way through a half-century of American history, the narrative begins at the dawn of the railroad age, in the North, home to the nation’s first separate railroad car, then moves briskly through slavery and the Civil War to Reconstruction and its aftermath, as separation took root in nearly every aspect of American life.

Award-winning author Steve Luxenberg draws from letters, diaries, and archival collections to tell the story of Plessy v. Ferguson through the eyes of the people caught up in the case. Separate depicts indelible figures such as the resisters from the mixed-race community of French New Orleans, led by Louis Martinet, a lawyer and crusading newspaper editor; Homer Plessy’s lawyer, Albion Tourgée, a best-selling author and the country’s best-known white advocate for civil rights; Justice Henry Billings Brown, from antislavery New England, whose majority ruling endorsed separation; and Justice John Harlan, the Southerner from a slaveholding family whose singular dissent cemented his reputation as a steadfast voice for justice.

Sweeping, swiftly paced, and richly detailed, Separate provides a fresh and urgently-needed exploration of our nation’s most devastating divide.

Steve Luxenberg is the author of Separate: The Story of Plessy v. Ferguson, and America's Journey from Slavery to Segregation and the critically acclaimed Annie’s Ghosts: A Journey into a Family Secret. During his thirty years as a Washington Post senior editor, he has overseen reporting that has earned numerous national honors, including two Pulitzer Prizes.

Absorbing....so many surprises, absurdities and ironies....Segregation is not one story but many. Luxenberg has written his with energy, elegance and a heart aching for a world without it.
— James Goodman - New York Times Book Review

Luxenberg has chosen a fresh way to tell the story of Plessy....Separate is deeply researched, and it wears its learning lightly. It's a storytelling kind of book....[He] skillfully works the military and the political background into his narrative.

[Luxenberg] is a fine writer who tells this story in an engaging manner....Separate reminds us that our history is not simply a narrative of greater and greater freedom.

Offers a striking view of Reconstruction and of the tragic stillbirth of freedom in that era....Luxenberg writes at the outset of his book that the story of Plessy is a reminder that ‘history is made, not ordained.’ In his moving portrait of the many figures who played a role in the case, he confirms that idea as well as another: that even the most hopeless fool’s errand can emerge, in time, as an unassailable triumph.

A dazzlingly well-reported chronicle of an important period....Luxenberg repeatedly manages to tell us stories that capture both the hope and hopelessness that has been central to America’s long argument about race....An eye-opening journey through some of the darkest passages and haunting corridors of American history.
— Terence Samuel - NPR

A surprising, compelling, and brilliant milestone in understanding the history of race relations in America.
— Bob Woodward, author of Fear: Trump in the White House

Riveting and deeply researched, Separate tells the story surrounding one of the nation’s most devastating acts: drawing a sharp color line between black and white after the Civil War. The Plessy case was a knife that cleaved America, and Steve Luxenberg brilliantly reveals that divide with his rich narrative of admirable and flawed characters caught in the battle over racial justice. Every paragraph resonates in today’s headlines.

This is a compulsively readable work of serious history, the absorbing and timely story of a disastrous U.S. Supreme Court decision, freshly told through the lives of those directly involved. Steve Luxenberg’s scholarship is deep and impressive; his writing even more so. This is history as it was lived, giving us a sense not only of the deep racism of the period, but the struggle of decent men and women to overcome it, in society and, most importantly, in themselves.
— Mark Bowden, author of Black Hawk Down and Hue 1968: A Turning Point in the American War in Vietnam

A magisterial assessment of a U.S. Supreme Court’s grievous moral collapse...a definitive work on the 1896 legal drama that afflicts us to this day.
— David Simon, author and creator of HBO's The Wire